Vubiq Networks has partnered with Ganpat University (GUNI) to educate students about innovative millimeter wave wireless technology and foster research and development into extremely high frequency (EHF) telecommunications applications. Vubiq has donated a pair of HaulPass V10g low-latency millimeter wave radios – the first and only 10 Gbps V-Band wireless link in the industry – to the university. The wireless installation is now live and successfully operating at 10 Gbps.

“India is making rapid strides towards establishing country-wide, high-speed networks to realize the Government of India’s ambitious vision through the Digital India initiative,” said Dr. Mahendra Sharma, Pro-Chancellor, Ganpat University. “GUNI’s partnership with Vubiq is extremely crucial at this stage considering it is national priority. This will enable us to create greater opportunities for the industry to test products/services in a high-speed, next-generation network environment. Students can learn advanced technology and the government with gain validation data points of this technology in an Indian environment. R&D carried out by this test bed facility will also be helpful to other tropical countries.” 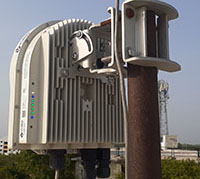 Located in North Gujarat in western India, Ganpat University is one of the most respected not-for-profit universities in the country. GUNI has successfully implemented a strong industry-academia linked higher education model and empowered its students through hands-on learning, exposure to industry, and enhanced employability. GUNI is known as the socially responsible university by its actions.

GUNI is the only academic institution in India to have been issued an experimental license for testing millimeter wave technology from the Department of Telecommunication of the Government of India. GUNI has also been invited to contribute to the policy framing of the Indian Prime Minister’s initiative PM WANI (Wi-Fi Access Network Interface), which is an initiative meant to increase Wi-Fi access throughout India.

GUNI and Cal Poly Pomona in California have issued a memorandum of understanding, recognizing that universities need to operate in a global environment of cooperation in the development of educational and technology initiatives for engineering students, faculties and R&D. To help promote this initiative, Vubiq Networks has also donated a pair of HaulPass E10g low-latency 10 Gbps E-Band radios to Cal Poly Pomona. We are proud to be collaborating with both GUNI and Cal Poly Pomona to help educate engineering students on the importance of millimeter wave wireless technology in advancing the state of the art in emerging fields such as 5G telecommunications backhaul.