Vubiq Networks has been an innovator in millimeter wave technology for over a decade. Leveraging a 30-year history in wireless engineering, the company has been able to apply the wide spectrum of bandwidths that became available in the 60 GHz V-Band and 70/80 GHz E-Band. By recognizing early on that the future of wireless applications would depend on extremely high frequencies, Vubiq Networks’ founder and CTO Mike Pettus participated during the mid-90s in the Millimeter Wave Communications Working Group that provided the FCC with the initial framework for creating the existing 60 GHz operating rules.

Today, Vubiq Networks’ technology innovation is reflected in our growing portfolio of 13 US technology patents, two US patent applications, and two European patents in millimeter wave components and system-level communications. This valuable intellectual property portfolio provides the company with the ability to continue to design and create innovative solutions in:

The primary application for our millimeter wave broadband wireless technology has been in high-speed, point-to-point and point-to-multipoint communications links and systems. Combining the now ubiquitous Ethernet interface with millimeter wave radios has resulted in superior speeds and ease of deployment and operation. Vubiq Networks has created patented component and system-level solutions for the telecommunications markets with multi-gigabit products that continue to evolve.

Our innovative V-Band wireless product solutions – including the HaulPass V60s Gigabit Ethernet radio and the HaulPass V10g 10 Gbps radio – have been extremely well received in the market. Furthermore, we are now in the process of applying these same advanced technologies and design philosophies to the E-Band spectrum with our recent announcement to develop an E-band solution. Thanks to our patented Modular Integrated Waveguide technology that separates the digital components from the analog components, we are able to rapidly develop new millimeter wave radios that consistently leapfrog the competition for high-speed wireless broadband applications.

US Patent Number 9088058, issued July 21, 2015. Waveguide Interface with a Launch Transducer and a Circular Interface Plate.

US Patent Number 9893406, issued February 13, 2018. A Method of Forming a Waveguide Interface by Providing a Mold to Form a Support Block of the interface.

US Patent Number 10320047, issued June 11, 2019. Waveguide Assembly Comprising a Molded Waveguide Interface Having a Support Block for a Launch Transducer That Is Coupled to a Communications Device through a Flange Attached to the Interface.

One of the most exciting areas of Vubiq Networks’ millimeter wave intellectual property is in the application of ultra high-speed, short-range communications as applied to solving the scaling constraints and costs for internal data center connectivity and switching. The limits of cabled and centralized switching architectures are completely eliminated by leveraging the wide bandwidths of millimeter wave spectrum for the high-density communications requirements inside the modern data center.

We now have the ability to provide more than one terabit per second (> 1Tb/s) of wireless uplink capacity from a single server rack through our innovative approach to create a millimeter wave massive mesh network. The elimination of all inter-rack cabling – as well as the elimination of all aggregation and core switches – is combined with higher throughput, lower latency, lower power, higher reliability, and lower cost by using millimeter wave wireless connectivity. We have been awarded four patents that cover chip-to-chip, blade-to-blade, and ultimately server-to-server communications without cables and switches. With the recent increase from the FCC in unlicensed spectrum (from 57 to 71 GHz), 14 GHz of bandwidth is now at our disposal to further enable wireless data center and cloud computing applications.

US Patent Number 7929474, issued April 19, 2011. System and Method for Wireless Communication in a Backplane Fabric Architecture.

US Patent Number 8422414, issued April 16, 2013. System and Method for Wireless Communication in a Backplane Fabric Architecture.

US Patent Number 8897184, issued November 25, 2014. System and Method for Wireless Communication in a Backplane Fabric Architecture.

US Patent Number 9537794, issued January 3, 2017. System and Method for Wireless Communication in a Backplane Fabric Architecture.

Our millimeter wave radio frequency identification (RFID) patents cover a unique data encoding scheme that exploits the natural physics of antennas at a tremendously small scale. The result is a chipless RFID tag that approaches the cost of printing a bar code, but with the ability to contain hundreds of data bits in the size of a postage stamp. Using our innovative millimeter wave hyperimaging radar techniques, not only can the data be retrieved from the tag, but also physically located. This new hyperimaging approach to RFID significantly reduces cost, while providing performance advantages and features not seen in existing systems. 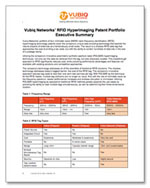 One of the Vubiq Networks’ first product offerings during the company’s early stage was the creation and production of a full millimeter wave transmitter and receiver at 60 GHz, including antenna, within a ball grid array (BGA) surface-mount package. The Vubiq Networks V60RX/TX110 was the world’s first millimeter wave integrated transmitter and receiver in a single module. Specifications include:

At Vubiq Networks, we will continue to create unique, patented solutions that break the traditional molds of millimeter wave wireless broadband applications. Future spectrum allocations above 100 GHz are now being planned to bring unprecedented bandwidths into existence.

We will welcome these exciting new frontiers with innovation and solutions for applications that are yet to be imagined.