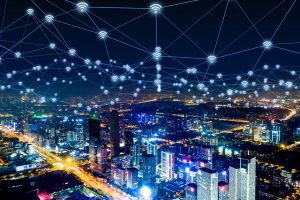 One of the most exciting new areas of Vubiq Networks’ patented millimeter wave technology is in the field of wireless fabric architecture, spanning chip-to-chip, board-to-board and rack-to-rack connectivity. The progression of our wireless fabric patent portfolio is based on the ability to predict the evolution of high-frequency semiconductor technologies – and as a result, predict the new applications that will be enabled.

The ever-present constraint for high-speed data communications, from the small paths between integrated circuits on a computer board, up through links between buildings in cities, has always come from the limits of how fast electrical signals can be transported via copper connections. Even with higher-speed fiber optics, a physical cable must still be installed, so by definition the physical constraint is built into the architecture.

Wireless connectivity means freedom to move information without physical conductors or cables. Starting with the concept of moving data between semiconductor chips, then between circuit boards in a server, and then from server to server in a data center, our vision is a “wireless backplane” that creates a virtual network fabric.

Vubiq Networks has been awarded a series of four US patents and one European patent for “System and Method for Wireless Communication in a Backplane Fabric Architecture.”

Filed in 2007, the first patent in this portfolio covers chip-to-chip and board-to-board connectivity in a wireless millimeter wave backplane, forming a network or fabric that can communicate between chips, boards and rack cabinets.

Filed in 2012, the third patent covers the use of modular antennas and enclosures for applications using a wireless backplane network. It was filed as a continuation of the prior patents.

Filed in 2012, the fifth patent was awarded by the European Patent Office. It provides additional global protection for the company’s backplane fabric architecture. 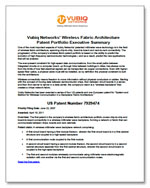 Point-to-point wireless telecom solutions use millimeter wave radios and directional antennas to provide data communications from one location to another, or from one building to another.

A wireless mesh network is a multi-hop wireless network formed by a number of stationary wireless mesh routers. These routers are connected wirelessly using a mesh-like backbone structure. Some of the routers function as wireless access points for client devices (for example, laptops and smart devices with wireless access) to attach themselves to the network. The client devices transmit and receive data via the backbone mesh network.

To connect to external networks such as the Internet, one or more routers are connected to the wired gateways via high bandwidth wireless backhaul solutions such as the Vubiq Networks HaulPass V10g.

Vubiq Networks’ wireless fabric technology can be applied to the challenges of scaling constraints and costs for internal data center connectivity and switching. Today’s limits of cabled and centralized switching architectures are eliminated by leveraging the wide bandwidths of the millimeter wave spectrum for the high-density communications requirements inside the modern data center.

Our patented technology has the ability to provide more than one terabit per second of wireless uplink capacity from a single server rack through an innovative approach to create a millimeter wave massive mesh network. The elimination of all inter-rack cabling – as well as the elimination of all aggregation and core switches – is combined with higher throughput, lower latency, lower power, higher reliability, and lower cost by using millimeter wave wireless connectivity.

As the world has become more dependent on cloud computing manifested in the big search engines, social networking, online shopping, and enterprise cloud-based IT systems, the growth of large data centers is exponential. The heart of the data center is the server, with large centers supporting more than 100,000 servers under one roof.

Server-to-server communications requires huge interconnected bandwidth to enable the surge in applications now running in the cloud. Any server to any server high-speed communications must be supported by the switching architecture within the center. The traditional approach is to interconnect the servers with a localized “top of rack” (TOR) switch located in each server rack cabinet. The TOR switch is in turn connected to aggregation switches at the next tiered level, called the fabric.

With larger numbers of servers, additional tiers are added at what’s called the core or spine. The switches are all interconnected with cable or fiber, and the amount of data center resources dedicated just to solving the cabling problem is staggering. A large data center can have more than 25,000 miles of fiber to provide the connectivity needed. The costs associated with tiered level switching and interconnecting cabling have become a major portion of the total data center cost.

The Solution: the Wireless Data Center 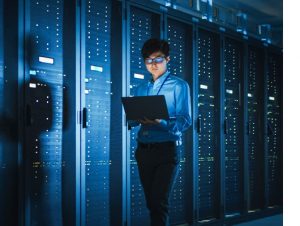 Vubiq Networks’ high-bandwidth millimeter wave technology can enable short-range inter-server communications without the need for cabling or external switches, providing a huge potential improvement in the ability to scale and support growth for the data center and cloud computing.

The approach is to have a wireless turret on top of the sever rack, with the servers interconnected through the turret for connectivity to any other sever in the center. Multiple channels of high-speed millimeter wave connectivity can be established with other rack turrets in the center. The turret is divided into 16 sectors, with each sector module capable of up to 100 Gbps. This provides a total rack uplink capacity to the mesh of more than 1 Tbps. This is an order of magnitude greater than the planned 40 Gbps and 100 Gbps TOR uplink capacities using traditional tiered switches and fiber.

Our approach completely eliminates all inter-rack and inter-switch cabling, as well as all aggregation and core tiered switches. The savings in power, cabling infrastructure, and switch costs more than justify moving to a wireless approach for the data center.